The reality that we were away from home now started to set in. The weather was definitely warmer than it was in the UK and we were looking forward to getting on the road towards Morocco. Had some breakfast on the ferry, myself opting for a full English and Locky going continental. It takes very long to get into port, the boat goes quite slow to get in.

Approaching port at Santander, half dressed for riding and standing outside so that we don't get to warm in the riding gear: 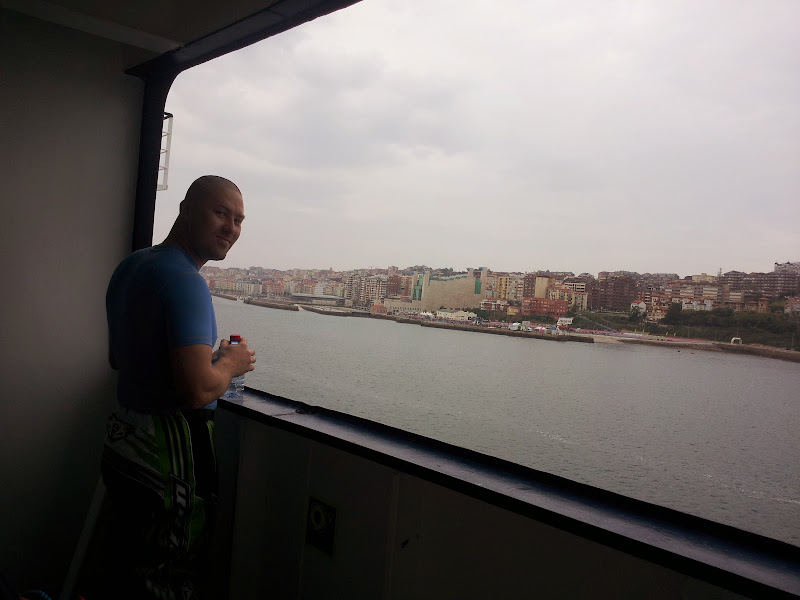 I opted to wear my normal MX riding gear all the way and took a light summer textile riding jacket (without armour) and a two piece rain oversuit additionally. I took short and long technical base layers as well as long merino wool base layers. Next time I will only take two sets of short base layers, rinsing whichever set I wore that day when we get to the hotel for the evening. I had some fairly cheap textile Wulfsport MX trousers for abrasion resistance on the legs and wore some Knox Flex Lite knee protectors. My Alpinestars Tech 3 off road boots completed my leg protection. I was very satisfied with this particular set up and will use it in the future. For the body protection I used a SuperShield armour suit (got it from GetGeared), it gives good, close fitting armour protection for your whole spine, your chest, elbows shoulders and some for the ribs. It also has an integrated kidney belt which helps a lot with keeping good posture and lessening riding fatigue. It's fairly well vented so it works in the heat too. I took two helmets, my normal X-Lite X-551 for the trek both ways through Spain and a HJC AC-MX off road helmet with Oakley goggles for the riding in Morocco. I took tinted and clear lenses for the goggles, they are easy enough to change over. In hindsight, I'd probably only take the MX helmet, goggles and lenses next time I go, but will make sure to have duct tape along. If it rains heavily the duct tape will get used to tape the always-open vents on the helmet closed and perhaps tape the openings between the googles and the helmet up to stop too much rain getting in. I ended up using the textile summer jacket only on the motorway slogs and wearing the rain oversuit as needed to keep the wind off me so I don't get cold. The rest of the time, mostly in Morocco, I wore a thin MX jersey over the armour suit. This worked well, you could stay cool enough not to dehydrate at a rapid pace. I was happy with this particular setup and felt I planned it well, I will use the same riding gear in the future. I might get better quality textile trousers and an even better armour suit for future use, but what I had would also be fine again.

Locky was posh with his Gore Tex Klim suit full of vents, but perfectly waterproof if he wanted to be. He used this on the motorway slogs and I must say it really does seem like the Klim stuff is worth the money. He wore Forma Adventure boots, the waterproof version. On the ferry to Spain I noticed a screw on the cabin floor from his boots. He put it back in and made sure everything else was tightened up (nothing else loose though) and didn't have any trouble with them after that. Locky only took one helmet, a Spada Intrepid dual sport helmet, and a set of goggles. He used the goggles for only a short while when we first went off road and declared the set up too hot. I think there isn't enough space between the goggles and the helmet view port to let air in to keep things cool (I've had the same issue with goggles in my X-551 before.) The rest of the time he was using some yellow cycling glasses I took along instead of his goggles. They don't keep the dust out as well as goggles, but at least they provide some essential eye protection. He also took some Lindstrands MX trousers, better quality than the Wulfsport ones I had, a Knox Urbane armour shirt with the optional chest protector and a couple of thin MX jerseys. Locky also wore the same knee protectors that I had. The MX stuff he wore mostly in Morocco where the weather was very warm with only the occasional reprieve when going over mountains and on high altitude roads.

Once we got off the ferry in Santander we found a fuel station and then set off south. We planned to ride down and skirt past Madrid then see how far we get south and find a place to sleep. The first part of the ride was good fun, over mountains with really nice passes to ride and making good progress as we were going faster than the satnav thought we could. Riding on the other side of road always takes a while to get used to again, but once you can remember to look left at junctions and roundabouts you're soon fine. After a few hours the roads quickly changed to motorway type riding with only the occasional bit of fun going over a mountainous area. This was the slog down, at first seeing a lorry you'd need to overtake in the distance makes things a bit more interesting, but soon even that fades. Riding like this is soul destroying boring, but it was a necessary evil we had to put up with. Neither of us were used to riding this kind of distance on the Stroms any more and we had to do all kinds of things to keep our arses from going numb and our legs stretched. I was falling asleep and even singing or shouting in my helmet didn't make the slightest difference. At least we were on road tyres (both on Anakee 2) so the going was smoother than if we'd decided to change our tyres ahead. Another small mercy on this slog day was that the weather was relatively mild most of the way. We eventually stopped, late afternoon, to decide where we're going to sleep.

Here's Locky having a leg stretch: 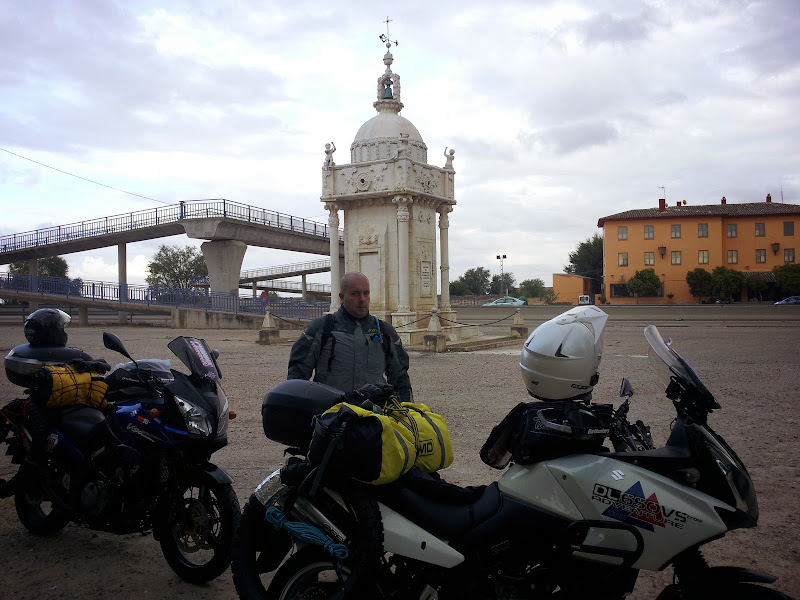 And here I am looking at the satnav to find a good place to sleep for the night: 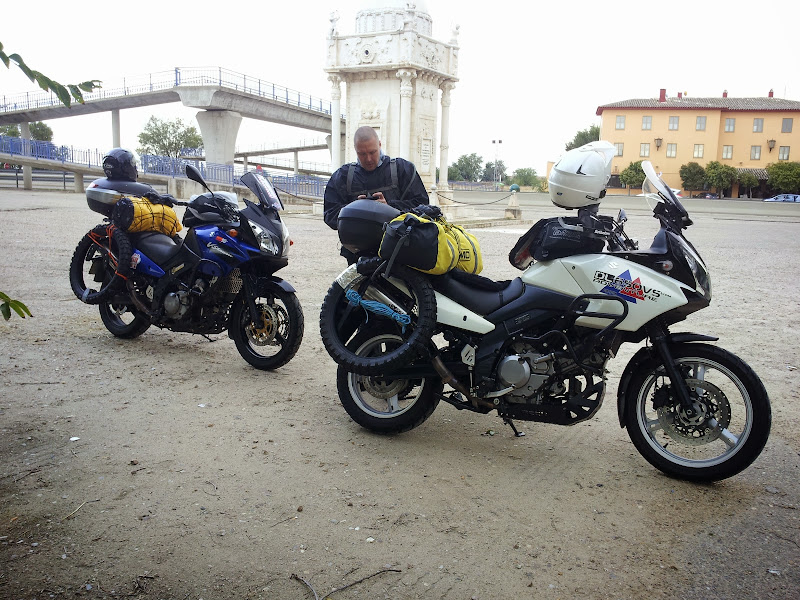 We slept at Santa-Cruz Motel-Restaurante at kilometre 217 on the autovia (motorway) going from Madrid to Andalucia. Dinner was tasty and the beds were nice and solid, otherwise it was basic, clean enough and well priced.